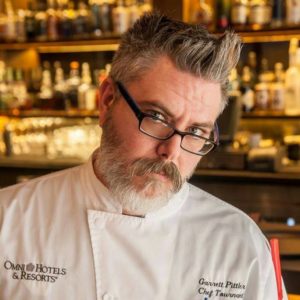 Garrett Pittler’s love for cooking began as a child, spending time in his mother’s Buffalo, NY kitchen cooking alongside his Greek grandmother. While other children were watching Mr. Rogers, he was infatuated by Martin Yan and Justin Wilson’s cooking shows. At the age of 18, knowing his calling was to become a professional chef, Garrett left home to pursue a degree at Baltimore International College of Culinary Arts. In 1999, Garrett graduated and started his career with McCormick & Schmick’s Seafood under Executive Chef Jerome Dorsch.

Chef Dorsch mentored Garrett, helping him to build a strong culinary arts foundation as well as assisting him in perfecting his cooking skills. In 2001, Garrett became the kitchen supervisor and opening trainer for Hard Rock Café. He was instrumental in opening restaurants in Queenstown, Rio de Janeiro, Melbourne, Grand Cayman Islands, Osaka, Dublin, and Moscow, applying his craft while learning about the local culture and food heritage. After traveling all six continents, Garrett returned home to Nashville and became Sous Chef at Romano’s Macaroni Grill. There he focused on simple Italian cooking and learned how to run a fast-paced kitchen line in a high-volume restaurant.

In 2004, Garrett joined Loews Vanderbilt Hotel. He was promoted to Restaurant Chef of “eat”, the primary restaurant of the hotel. He strongly believes in sourcing local ingredients to express his “New Southern Food Experience” using classical dishes as inspiration. In 2013, after seven years with Loews Hotels, Garrett left to pursue his next venture as Executive Chef of Chelsea Bistro in Whites Creek, Tenn. Chelsea Bistro is a traditional French bistro, specializing in casual French fare. Garrett grows about 75% of the produce used at the bistro in the garden on the property. Sourcing local meats, produce, composting all vegetables and plant material, Garrett works toward his idea of a sustainable restaurant. After closing Chelsea Bistro Garrett joined the Omni Resort team as the Chef Torrent. Later becoming the Regional Executive Chef at City Winery. He is currently the COP Specialist at US Foods. His new show is Breaking Bread which will air on Circle All Access Network starting November 2020.