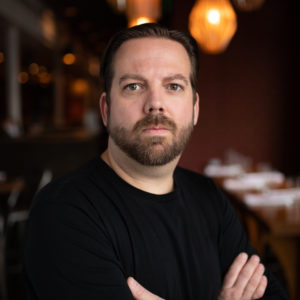 Born and raised in Naperville, Illinois, Corporate Chef Tom Eckert developed a love for cooking at an early age. Eckert received his degree in culinary arts from the Cooking and Hospitality Institute of Chicago, and soon became junior sous chef at Monsoon, an upscale Indian-Asian restaurant in Chicago before moving on to serve as sous chef under Maneet Chauhan at Vermilion in Chicago.

Eckert then became executive chef at Café 103, which was nominated for best new restaurant and listed as one of the city’s “21 Best New Restaurants” by Chicago Magazine under his direction. During his time there, Food & Wine included Café 103 in a list of where to go next in Chicago, and TimeOut Chicago named Café 103’s Guinea Hen Roulade in their list of “100 best things we ate this year.”

From there, Eckert returned to his hometown of Naperville, IL to serve as executive chef at Deliro, a Latin fusion tapas restaurant before moving to Nashville to serve as corporate chef for Morph Hospitality Group. Eckert now resides in Nashville with his two children Mason and Josie, and their Bernese Mountain Dog, Dogosaurus Rex.