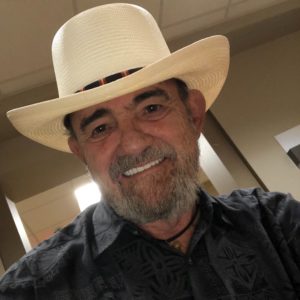 Chuck Creasy was born in Sumner County, Tenn., and spent his early childhood in Westmoreland. He served as a First Lieutenant in the U.S. Army Artillery and spent one tour of duty in Vietnam as a forward observer with an infantry company. He studied art in Nashville at the Harris School of Advertising and in Woodstock, NY, with watercolorist John Pike and spent time with Norman Rockwell in his studio in Stockbridge, Mass.

Chuck started his career in the advertising and design arena in the early 1970s at Eric Ericson & Associates. His work for clients such as HCA, the 1984 Reagan/Bush Campaign, Jack Daniels, the Boy Scouts of America, the Nashville Predators, and most recently with the Nashville Convention & Visitors Corp has won hundreds of local, national, and international awards.

He has judged numerous advertising and design awards shows including the prestigious London International Advertising Awards where we won Best of Show two consecutive years. Chuck holds the prestigious Silver Medal from the American Advertising Federation-Nashville and was named the Art Director of the Year in 1990. He has served as creative director for some of the Southeast’s largest advertising agencies and started his own company, Chuck Creasy Creative in 1990, which he merged with Dye, VanMol, & Lawrence and became the fourth partner and creative director.

Chuck served as Vice President of Creative for the Nashville Convention & Visitors Bureau where his main charge was the national and international branding for the city of Nashville. He recently retired from the NCVB after 11 years as their creative director. While there the city of Nashville became one of the most visited cities in the United States. Among numerous other awards won while at the NCVB, Chuck won 2 Lions(Gold and Bronze) in 2014 from the Cannes Lions Festival for a documentary, “For the Love of Music…the story of Nashville” for best-branded content and entertainment.

Again in 2016, he won National awards for a second documentary, “For the Love of Music…the story of the Nashville Songwriter”, including two more Lions from the Cannes Festival. He continues to do project work with select clients of his own such as Senator Lamar Alexander, Phillips Builders, The NHL Nashville Predators, Jimmy Kelly’s, and does work for an impressive list of not-for-profits clients such as The Native American Indian Association of Tennessee where he serves on their board and is chairman of the marketing committee, Make-A-Wish Foundation and The Middle Tennessee Boy Scouts of America, to name a few.

With all this Chuck still finds time to pursue his real passion, watercolor painting. His watercolors are garnering attention throughout the Southeast and a two-man show of his paintings done after a trip back to Vietnam in 2018 is scheduled for 2021. Scuba diving, International travel, and the study of Mayan culture and mentoring young creatives fills a busy “retirement.”