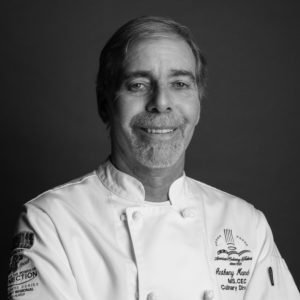 Chef Anthony Mandriota began his culinary training at the home of his grandparents in Astoria, Queens, New York. His Grandmother Josephine’s simple message: start with the best ingredients, do not crowd your pan, and you eat with your eyes first. I have lived by these principles my entire life. His heritage is Italian, and he loves cooking and eating Italian cuisine. At the age of eight, Anthony tasted Classical French Cuisine, a Bordelaise sauce, and for the first time, he knew his passion was clear.

Anthony began working in hotels in the Catskill region of New York at the Bel Fiore Hotel, an Italian American hotel is South Fallsburg New York in 1979. He started an apprenticeship at Le Soir, a Classical French restaurant in Eastern Long Island to master his Classic French technique a few years later. After rising to Sous Chef for this restaurant, Anthony moved around the New England area to hone his French skills and techniques while integrating an international perspective and sustainable cooking methods.

Anthony’s next move was south to Key Largo, Florida.

“The Keys are a mecca for fresh seafood, and growing up on Long Island, the diversity of local seafood in Key Largo was enthralling. I could go to the docks early in the morning and pick fish for the day’s menu.”

In 2008 Anthony accepted the Culinary Department Chair position at the International Culinary School at the Art Institute of Tennessee, where he remained until the school closed in December of 2018. During his tenure at The Art Institute, Anthony wanted to really get to know his students, so he taught the first kitchen class, Fundamentals of Classical Technique. To ensure students were ready to enter the highly competitive profession of Culinary Arts, he also taught Foodservice Financial Management and Art Culinaire classes.