Starting with brainstorming session in Sequential Illustration II, Instructor Hugh Shelton lead a 15-student team through the development and creation of Threshold, a 48-page comic containing a 32-page story written, sketched, inked and colored by his Comic Class. 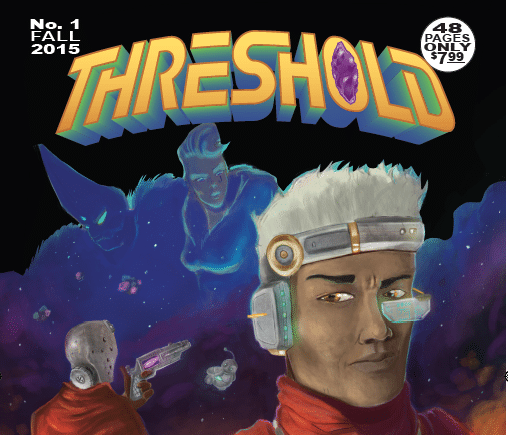 Unveiling details of the alien planet, Vidrolas, it’s three moons and the two-star binary system iis located in was one of the first concepts generated by class. Creation of the planet was followed by creating archetypes including the Hero, the Mentor, the Shadow, the Herald and the Trickster, just a few of the characters and themes highlighted in the comic novel. 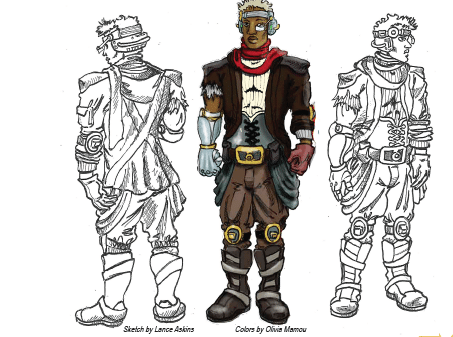 Using the 12 Stages of Joseph’s Campbell’s Hero Monomyth to explain the process of the Hero’s journey, students were fully immersed in creating this comic during their 15-week semester. A comprehensive description of the planet helped set the stage for Eden Nox, the Hero, to unravel his story. Imagine a harsh environment with extreme temperatures ranging from desert hot to extreme cold. Vidrolas is made of a crystal that is harvested to help advance technology of the planet’s floating cities.  Nox is a gritty protagonist seeking revenge on the Company. The class’s first weeks focused on the developing story, naming the characters and constructing locations for their scenes

“Once the characters, locations, vehicles, and creatures were developed, the story virtually wrote itself,” said Shelton. By week four, the script was finished and the illustrating process began. Shelton divided students into three teams of five, each with their own student leader. A pencil team was assigned to sketch every scene. Each page included 3-5 students who collaborated on sketches to make a strong foundation for the book. Pencilers also helped draw and setup the basis of the each character.

Once sketched, the images were scanned so they could move to the inking team. Each page was inked twice and the best page was picked to be included in the book. After the pages were inked, the processed moved onto the colorists, who help bring the book to life. Color palates created for each character and scene allowed all colorists to work within the same palate without worry of variance or calibration. Creating their own color palates and activating them with their team was just one of the many lessons students learned in this project. They also discovered the importance of collaboration and communication as a team.

One of the lead inkers thinks of herself as an introvert, and having to be a team leader helped her understand the different responsibilities of each group. Students also discovered setbacks in deadlines and communication, and the importance of being open and responsive. No one wanted to be the person who let the rest of the team down, which pushed everyone to meet deadlines and finish on time. “I also love the fact that there were students who were willing to do more than what was requested,” said Hugh. “I was just as pumped to teach as the students were to learn.” 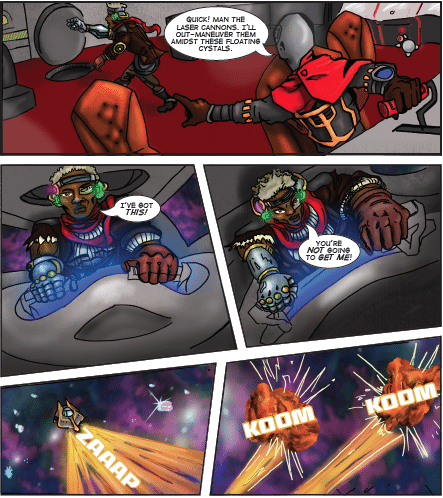 After partnering with local printer, Jive! Nossi was able to get rates affordable enough so each student received a copy and extras could be printed to show local high school classes the types of projects Nossi art students collaborate on.